Welcome from Mayor and Governor of Vienna

It is really a pleasure to invite you to the 25th World Congress on Controversies in Obstetrics, Gynecology & Infertility (COGI) in Vienna this year.

Vienna, also described as Europe’s cultural capital, is a metropolis with unique charm, vibrancy and flair. It has all the inspiration that you could wish for in order to discover this wonderful part of Europe.

Vienna is the city of music: Vienna has been synonymous with music for centuries, and was home to Mozart, Beethoven, Schubert and Johann Strauss. This outstanding musical heritage has been preserved right to the present day. The Wiener Philharmoniker is one of the world’s top orchestras, the Vienna Boys’ Choir is incredibly successful wherever it tours, and the Vienna Conservatorium has produced innumerable international award-winners in all musical disciplines.

Apart from being regarded as the City of Music because of its musical legacy, Vienna is also said to be the “City of Dreams” because it was home to the world`s first psychoanalyst Sigmund Freud, a neurologist who is well known for being one of the greatest interpreters of dreams. Vienna owes its universal appeal to the way it excitingly combines imperial nostalgia with a highly creative cultural scene, responsibly cultivating a precious heritage and charming traditions whilst taking on board the latest trends. Architecture, for instance, dating from imperial times has left an indelible mark on the city. Magnificent edifices, predominantly in baroque, historicism (such as the “Ringstrasse”) and art nouveau styles, and the city’s grand scale cause you to forget that this is the capital of the small Republic of Austria with only 8.4 million inhabitants.

Down the centuries, Vienna has always produced and nurtured world-famous artists. The collecting passion of art-loving rulers and monarchs has made Vienna a treasure house par excellence. The Museum of Fine Arts, for instance, is one of the world’s largest and most distinguished museums, housing priceless works of art. Art accompanies you wherever you go in Vienna.

In recent years Vienna also has established itself as a major player in the world as an international conference destination. The climate of tolerance and understanding creates ideal conditions for international meetings. I wish you an educational, interesting and inspiring event and sincerely hope that you enjoy Vienna.

Mayor and Governor of Vienna 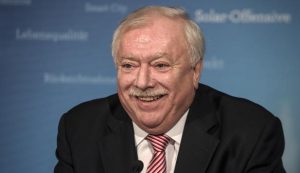